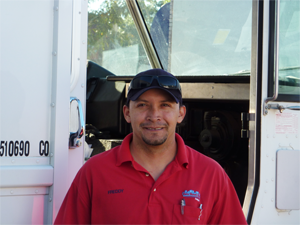 Freddy is our Route Service Representative for Longmont. Freddy has worked for Main Street Mat Company since March of 2010. Freddy was born and raised in Longmont, CO. He graduated from Skyline High School and the ITT Technical Institute. Freddy is a single dad to his daughter Skylar. Freddy enjoys playing guitar in his free time.